Wow, I have to say… I feel good! Do you feel good? I really hope you do.

Today I have planned to write my own very first piece of COBOL code. That means I’ll write my own JCL to compile the COBOL and execute it. Let’s keep it simple today. To be honest, that’s an easy way to hide the fact that I don’t fully know what I’m doing, haha. The next step will be writing COBOL code that reads a data set? But before I do that, I want to make some blogposts on Zowe first, as Master the Mainframe 2019 is approaching!

Is this blog a tutorial? Hmm, it might be. I just write about what I’m doing in a tutorial-like way. Why? Because I like to document stuff, weird, I know. I want to explain the COBOL and the JCL I am writing. I hope to do a good job as I don’t want to blunder, after all, you never know who reads this. Hi FBI!

Hello world! KIDDING! That would be too much of a Kevin thing to do. Let’s make a FizzBuzz. This will learn me how to code a fizz buzz and it might help you during a coding interview. There’s tons of FizzBuzzes out there, probably also in COBOL, but this one will be explained, coded inside a mainframe, executed by JCL and made with tons of love.

So what is a FizzBuzz?

A FizzBuzz is a very easy programming task that’s used in most software developer interviews. It was invented by Imran Ghory.

So let’s do this in COBOL, compile it using JCL and see if I can get it to work. For this blog’s purpose, I’ll code the simple version of FizzBuzz.

We’ll copy the JCL from TESTCOB that we’ve reviewed last time. Don’t worry, copying code is not a crime as long as you know what the code actually does.

So I went to RFE (1), UTILITIES (3), DSLIST (4), entered data set name prefix SYS2.JCLLIB, edited SYS2.JCLLIB and I made a new member using the primary command s.

After this the new empty member was created. 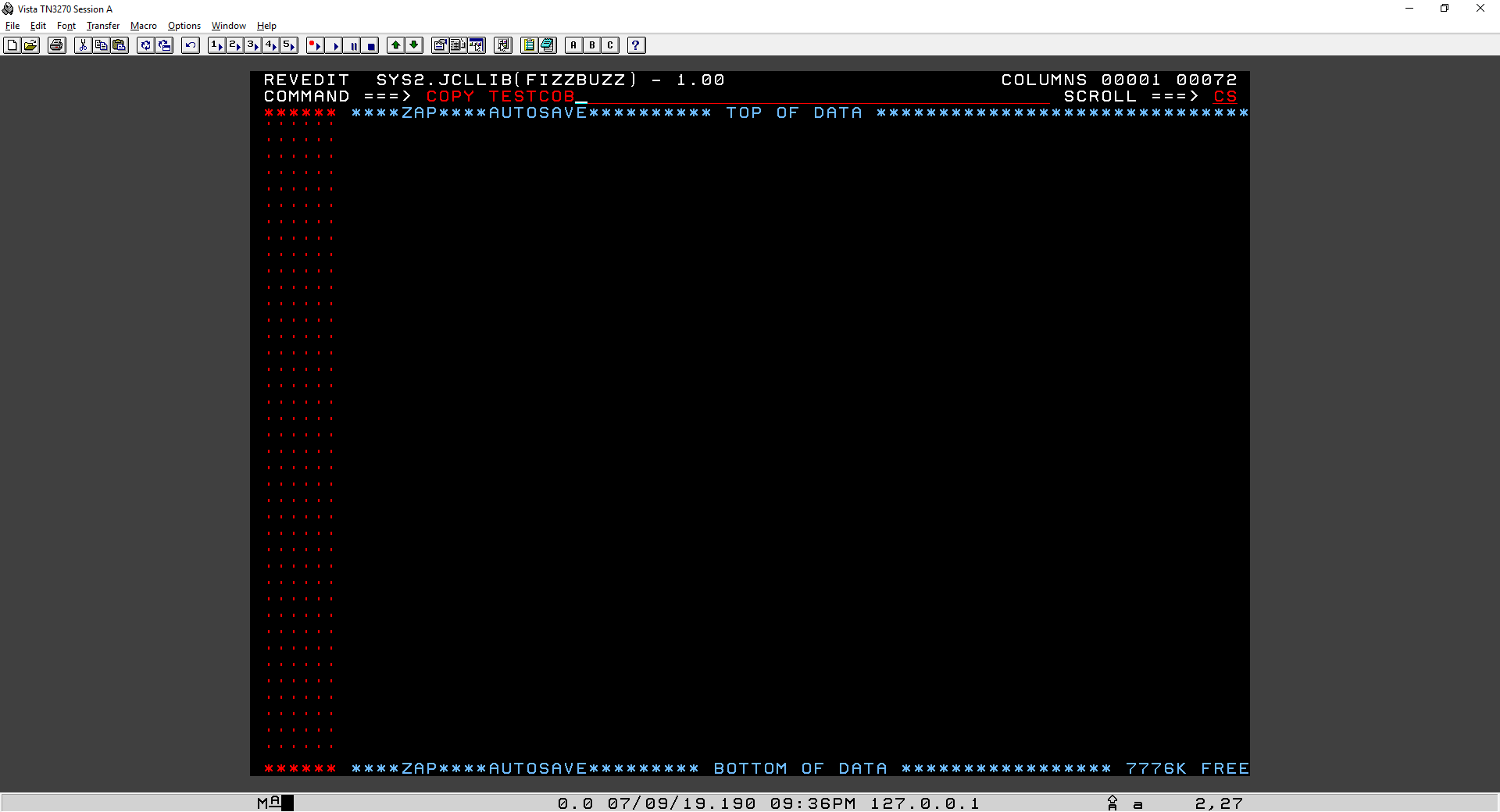 Into the new member FIZZBUZZ I want to COPY TESTCOB. This can be done with ease using, you’ve guessed it, COPY TESTCOB.

Done, all copied! So what’s next? First we’ll take note of Marco’s comment and rename the job to our user profile name. In my case it’s HERC01.

I have changed TESTCOB to HERC01. I also have made some other small changes. There might be some issues running the job as we’re using our username as the jobname, we already have a job running with our name the moment we login. So that’s the reason it will ask for a jobname.

Every variable except for indexes are defined with a level number. In this case the level number for WS-FIZZ is 77, not cool, but ok. Most companies don’t like using level number 77 as it wastes space, some even have a policy against using it. For more details about this visit mainframestechhelp.com.

PERFORM CALCUL UNTIL WS-I > 99. This line of code performs the “function” named CALCUL until the WS-I variable is larger than 99. After that it will stop the execution. I know, CALCUL is not an ideal name, but say it out loud. Sounds cool right?

Believe me, this is so embarassing. I had so much troubles with the COBOL section, it is unreal. The END-IF should begin A-MARGIN. But I couldn’t start my IF in the A-margin? Also COBOL expected a condition for the else? But when I provided a condition it didn’t work?

Well then, I guess I’ll have to work around the fact that I can’t use ELSE.

Lo and behold the production of me learning COBOL for 2 hours on a friday night. Because I can’t use the ELSE for some reason, I just checked if WS-R was bigger than 0 and then called the next “function” in line.

I really don’t like putting this ugly code out here, but I just kind of felt like it. If any of you would like to help me out, or yell at me, feel free! 🙂 I can do better sir, just not right now, heheh. (sweating) 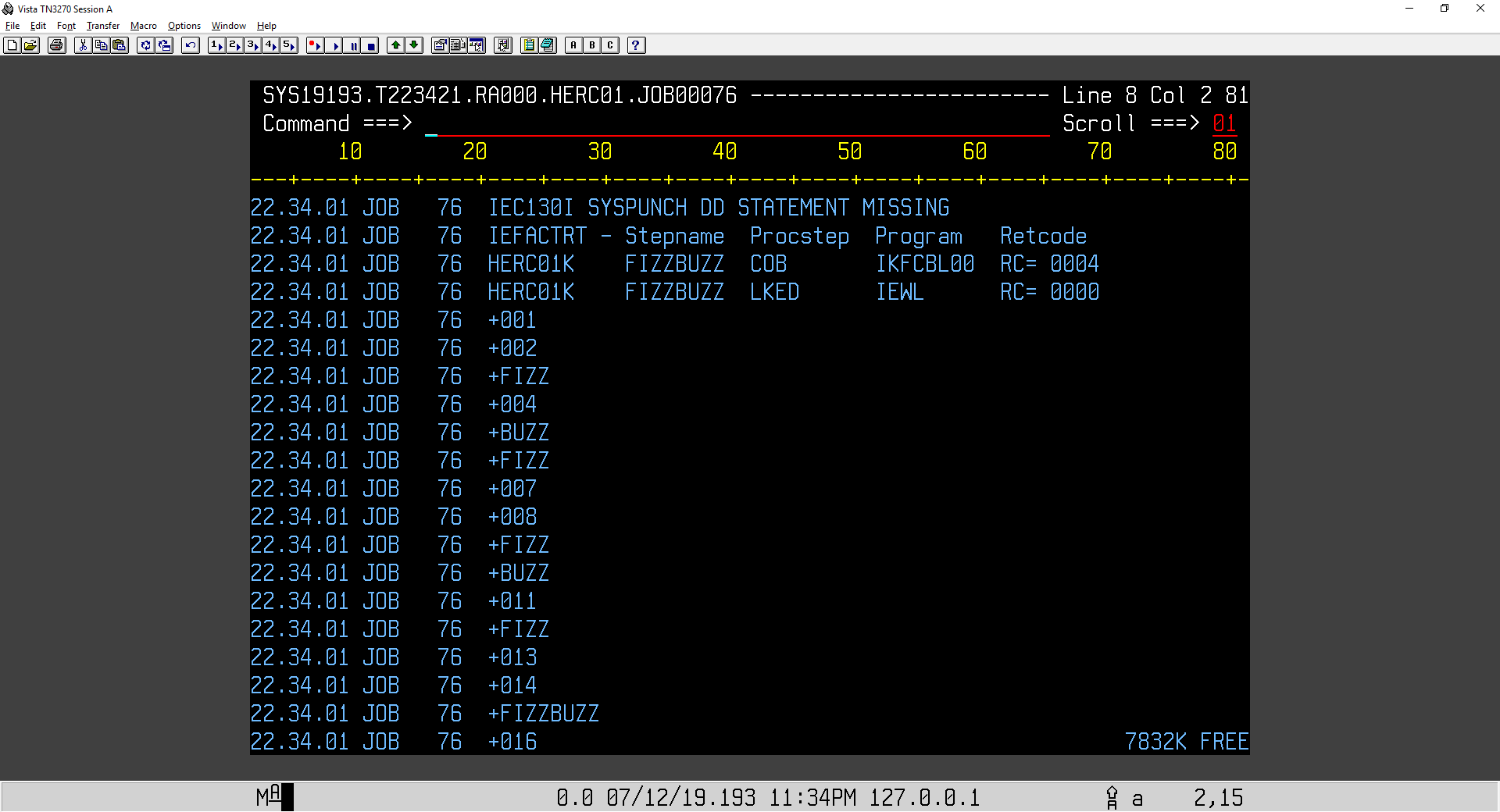 I really did it! I have to say, I never expected to get this far with the little COBOL learning I did. To conclude, I really should study and practice before I just start doing things.

Not too long ago Zowe has announced that it’s now available on IBM Z Trial! It’s only a 3 day trial though. So this means I’ll have to request the trial on a friday so I can solve the introduction and blog about it in one weekend.

Zowe will also be used in the new Master the Mainframe 2019 challenges, so this will be a very nice warm up to prepare us for that big moment in september!